For almost three decades, Brazil’s baile funk music genre has been attacked by conservative groups and reactionary media. Now, however, leading figures from this home-grown hip-hop scene are taking a stand in defense of the Brazilian people, in an attempt to rescue the country from its current political and health crises.

There’s a connection between baile funk and the pandemic in the name of the Butantan Institute, the São Paulo-based body responsible for research and manufacture of supplies for the Brazilian public health system.

“Butantan”, in the indigenous Tupi Guarani language, means crushed soil. But it also looks and sounds a lot like ‘Bum Bum Tam Tam’, the title of a 2017 baile funk song by MC Fioti.

Butantan, the largest producer of immunobiologicals and biopharmaceuticals in Latin America, is currently manufacturing a COVID-19 vaccine in partnership with the Chinese company Sinovac. This has drawn criticism from groups and individuals, including Brazil’s president Jair Bolsonaro, who question the vaccine’s efficacy.

In response, as a gesture of support for Butantan’s work, amid a flurry of memes associating baile funk with the Tupi-Guarani word, MC Fioti released a remake of ‘Bum Bum Tam Tam’ on January 21.

The song is now widely claimed as the anthem of Brazil’s vaccination campaign: the video was shot at Butantan’s headquarters, and portrays staff members dancing to the song, as MC Fioti sings in the labs:

In just four verses, ‘Bum Bum Tam Tam’ communicates more effectively with Brazilians than their government has done in almost a year of the coronavirus pandemic.

Grieving the loss of 230,000 lives, Brazil is fighting misinformation alongside the virus. The official treatment promoted by the Brazilian Health Ministry, named ‘early treatment’ (tratamento precoce), has been deemed insufficient by the scientific community. Bolsonaro, meanwhile, has joked that the vaccine might turn people into alligators.

With the video attracting almost 8 million views in seven days, the vaccine version of ‘Bum Bum Tam Tam’ refutes official fake news: it points out that the Butantan vaccine is safe, and it should be given priority over treatments that lack scientific backing.

Baile funk has long inconvenienced elite and middle class reactionaries with its ‘noise’ and ‘immoral content’. But what they really dislike is its capacity to communicate with the larger and unprivileged sectors of Brazilian society.

Today, the groups who have previously supported attempts to criminalize baile funk – but who oppose the government’s approach to the pandemic – should acknowledge that the genre can be a tool to counter Brazil’s epidemic of misinformation.

Baile funk puts social contradictions in the spotlight. In 1995, MCs Cidinho & Doca cemented the social role of baile funk by blasting it from popular radio stations, with lyrics such as:

I just want to be happy
To walk peacefully in the favela where I was born
And be proud
Knowing that the poor also have a place.

Baile funk songs deal with Brazilian machismo, and with matters of race, class and violence in favelas. It reflects the needs and desires of marginalized populations and the everyday experiences of those on the periphery.

As a heterogeneous genre, baile funk has branched into different styles over the years. For instance, in ostentation funk (funk ostentação), MCs boasting expensive clothes, jewelry and cars reflect the wishes and desires of poor Brazilian youth, in a society that encourages consumption.

This style thrived during the Lula administration of 2003 to 2011, during a commodities boom in which the purchasing power of Brazil’s less affluent classes increased.

Alternatively, in gospel funk, the music serves as a backdrop to religious lyrics. This emerging style communicates with Brazil’s growing evangelical population.

In 2021, it’s conscious funk (funk consciente) has proved crucial, as exemplified by ‘Bum Bum Tam Tam’. Other examples of conscious funk include ‘Nunca foi Sorte (It was never luck)’ and ‘Diga Não às Drogas (Say No to Drugs)’, which describe issues relating to addiction, racism and police violence.

Cultural prejudice and structural racism in Brazilian society, amplified by mass media, are largely responsible for attempts to criminalize baile funk. Congress has successively attempted to censor or even ban it.

In 2017, legislators argued that baile funk was a “fake cultural expression” and a public health problem. In 2019, they attempted to restrict lyrics that they said encouraged hatred of the state and the police.

Certainly, some aspects of baile funk deserve criticism. Many songs contain violent language aimed at women, or lyrics that objectify their bodies and in extreme cases endorse rape culture. Similarly, the genre has been linked to irresponsible behavior during the pandemic, with many instances of crowded baile funk parties, despite social distancing restrictions.

But along with the criticism, it is important to recognize the genre’s ability to spread a coherent and simple message about the virus. Instead of attempting to criminalize Baile Funk, we should acknowledge and defend its social role.

Today, Brazil is grieving amid the chaos caused by the pandemic, which has been exacerbated by bad government decisions, neglect, and misinformation.

In a country whose most severely affected populations are poor and from peripheral neighborhoods, ‘Bum Bum Tam Tam’ has risen to the challenge. In 2021, when truth has become a scarce resource, baile funk might just save Brazil.

Marilia Arantes is a master student at the Central European University, where she is engaged in a study group about Latin America and works as a research assistant in a project about Brazil. Twitter: @Mar_ilia

Rock Platform Shoes at Your Next Rave

Brazilians Can Dial 192 and Get Emergency Care in 10 Minutes

Vitória Bonaiutti de Martino was born in São Paulo 80 years ago today. In ...

The estimated aging of the Brazilian population and a rise in medical costs should ... 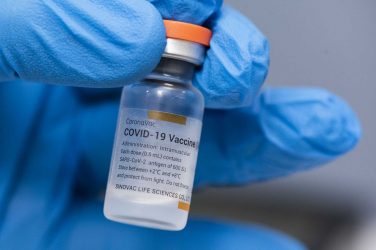 The rediscovery and conversion of Northeastern music to a commanding pop posture is one ...

In his latest foray as a leader for Adventure Music, the multi-talented Jovino Santos ...