But how could you put up with this? I suddenly asked, with a human bone
choking me.
By Brazzil Magazine

Founded around 1875 as the village of Santo Antônio de Campo Grande, Campo Grande
really began to grow when the railway came through, in 1914. The city became the capital
of Mato Grosso do Sul in 1977 by decree of military President Ernesto Geisel, when the new
state splintered off from Mato Grosso. It is known as the Cidade Morena because of its red
earth. Manganese, rice, soy and cattle are the sources of its wealth. Campo Grande lies
716 km south of Cuiabá and 403 km southeast of Corumbá.

There are no tourist attractions in Campo Grande, but because it’s a transport hub,
most travelers end up staying here overnight before heading out. Like all big cities,
Campo Grande has plenty of hotels and restaurants, and gets lively on weekends when the Gaúchos
come to town.

The Museu Dom Bosco, Rua Barão do Rio Branco 1843, is the only museum in town that’s
worth a look. It has an excellent collection of over 10,000 insects, including 7000
butterflies. There are lots of stuffed animals, and interesting exhibits about the Bororo,
Moro, Carajá and Xavante Indians.

Reasonably priced handicrafts are also available. The museum is open daily from 7 to 11
am and 1 to 5 pm.

This port city on the Rio Paraguai and the Bolivian border is the southern gateway to
the Pantanal. Corumbá, or Cidade Branca (White City), was founded and named in 1776, by
Captain Luis de Albuquerque.

By 1840 it was the biggest river port in the world, boasting a dozen foreign
consulates. Ships would enter the Rio de la Plata in the South Atlantic and sail up to the
Rio Paraná to its confluence with the Rio Paraguai, then continue up to Corumbá. The
crumbling but impressive buildings along the waterfront reflect the wealth that passed
through the town during the 19th century. With the coming of the railway, Corumbá lost
its importance as a port and went into decline.

The city is 403 km northwest of Campo Grande by road or rail. Due to its strategic
location near the Paraguayan and Bolivian borders (Puerto Suarez is only 19 km away),
Corumbá has a reputation for poaching, drugtrafficking and gunrunning. Be cautious if you
come here.

Things to See & Do

Corumbá’s star attraction is the Pantanal, and you can get a preview of it from Morro
Urucum (1100 meters). Tourists looking for something different might consider a
two-day excursion to Forte Coimbra, which is a sevenhour boat trip south on the Rio
Paraguai. In days gone by, the fort was a key to the defense of the Brazilian west, and
you still need permission from the Brigada Mista (at Avenida General Rondon 1735) to visit
it.

Daily boat tours of the Corumbá environs are available through all
travel agencies. An allday trip on the boat Pérola do Pantanal will set you back
$25, including lunch. Other packages include sightseeing trips to Bolivia and day trips by
road.

Many budget travelers are choosing to go on cheap three to fourday tours into the
Pantanal. These trips, generally costing around $20 a day, can be very roughandready
affairs—try to imagine boy scouts on cachaça. Accommodation is in hammocks,
under thatch or in somebody’s shack. Food is generally pretty good, though you must take
water, and the trucks may break down. Some of the `guides’ are exalligator hunters, so
their attitude towards animals leaves a lot to be desired. You’ll see lots of birds and
plenty of alligators, but the mammals are understandably a bit shy, especially when being
chased by a truck at 80 km/h.

If you want something well organized, and riding around in the back of a pickup truck
doesn’t grab you, pay a bit more and stay at a hotelfazenda for a few days. If
you’re prepared to take it as it comes, you might have a good time.

Before signing on with one of these trips and certainly before parting with any cash
there are a few things you should check out. Firstly, find out how far into the Pantanal
you will be going—it should be at least 200 km preferably more. Then ask about the
itinerary, and get it in writing if possible. Is the program flexible enough to account
for sudden weather changes? Check out the truck. Does it look OK? Does it have a radio or
carry a firstaid kit in case of emergency? A bite from the boca de sapo snake will
kill in half an hour if left untreated.

Expect to spend at least one day simply traveling deep into the Pantanal, and one day
returning. Then allow at least two days for seeing wildlife at close quarters. Definitely
insist on doing this on foot—vehicle should be used only for access, not for
pursuit. Your chances of enjoying the Pantanal and its wildlife are greatly increased
if you go with a reputable guide who: forsakes the `mechanical chase’ approach;
accompanies small groups (preferably less than five persons) on an extensive walking trip
through the area for several days; camps out at night (away from drinking dens!); and
takes you on walks at the optimum times to observe wildlife—before sunrise, at dusk
and during the night. A trip along these lines will require at least four days (preferably
five).

Insist on meeting your guide (or make it clear in writing that you will go only with a
designated guide), and avoid signing on through an intermediary. How many years has your
guide been in the Pantanal? Remember that speaking English is less important than local
knowledge. Someone who has spent their life in the Pantanal won’t speak much English.

There are a lot of shonky guides around. In Corumbá they’re known as guias piratas (pirate
guides). They’re not registered with the Associação dos Guias (Guides Association), so
if you have some complaint or want your money back, you have no course of action. On these
shonky tours, there is a lot of cachaça drinking, the theory being that since cachaça
is cheaper than gasoline, it costs less to convince drunk tourists that they’re having a
good time. Then there’s no need to drive as far as promised. Tales of woe with pirate
guides include abandonment in the marshes, assorted drunken mayhem and even attempted
rape.

The Casa do Artesão, in the old prison at Rua Dom Aquino 405, has a good selection of
Indian art and artifacts, as well as the best Pantanal Tshirts in Corumbá.

Aquidauana and Anastácio are twin towns situated on the Rio Aquidauana, 138 km from
Campo Grande. They represent the beginning of the Pantanal and there are a number of
excellent hotéisfazendas in the area. In Aquidauana there’s not much to interest
the traveler, though it’s a pleasant place in which to spend a night.

Coxim is a small town about halfway between Cuiabá and Campo Grande, on the eastern
border of the Pantanal. Its drawcard is the piracema, when fish migrate up the
Taquari and Coxim rivers, leaping through rapids to spawn. The piracema usually
takes place from September to December; if you’re traveling this road during that period,
it’s worth stopping off to have a look. The fishing (pacu, pintado, curimbatá,
piracema end dourado) is good from August to December. A fishing license is
required. There are also some pretty waterfalls in the area, notably the Palmeiras falls,
on the Rio Coxim.

For places to stay and places to eat, read the book

Apart from the Pantanal, the small town of Bonito is one of the major tourist
destinations in the state of Mato Grosso do Sul. The town itself has no attractions, but
the natural resources of the area are impressive. There are many caves in the region, the
main ones being Lago Azul (an underground lake that’s 156 meters deep) and Nossa Senhora
Aparecida. To visit the caves, you need a guide, because the caves are locked and the
guides have the keys.

Another attraction of the area is the incredibly clear rivers, where it’s possible for
divers to see the fish eyeball to eyeball.

Hapakany Tur (2551315), at Rua Pilad Rebuá 626, is a wellorganized outfit. Sérgio da
Gruta, who runs it, is a good guy and knows the area very well. He offers several
different excursions, including a rubber rafting day trip. Prices vary, but are mostly
around the $30 mark.

Ponta Porã is a border town divided from the Paraguayan town of Pedro Juan Caballero
by Avenida Internacional. It was a center for the yerba maté trade in the late
1800s, long before it started attracting Brazilians, who like to play in the Paraguayan
casinos, shop for perfumes, electronics and musical condoms, and hang out in ritzy hotels.

Send your
comments to
Brazzil

Meanwhile, South of the Equator 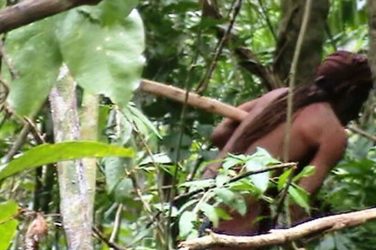 It happened eight years ago: Elicarlos Ferreira da Silva and his family were returning ...