Brazilian police launched the so-called Greenfield Operation, an investigation of fraud at state-run companies’ pension funds, as a judge ordered dozens of senior financiers and executives away from their firms, including the chief executive of JBS, the world’s biggest beef exporter.

Police carried out five arrests, more than two dozen interrogations and over 100 search warrants, seizing jewels, luxury vehicles, artwork and an airplane in an asset freeze to cover up to 8 billion reais (US$ 2.5 billion) in alleged damages.

The federal judge overseeing the case, Vallisney de Souza Oliveira, ordered the chief executive of meat packer JBS SA and 39 others under investigation to suspend their corporate roles, avoid all capital market activity and forfeit their passports in order to avoid jail.

JBS shares fell 10%, the biggest drop in six months, at the prospect of billionaire brothers Wesley and Joesley Batista, who run JBS and their family’s holding company J&F Investimentos, respectively, from serving at the group’s firms.

The probe of the pension funds is the latest in a string of investigations into corruption at the vast overlap of Brazilian business and politics, rattling Latin America’s largest economy and feeding political instability.

The four pension funds under investigation, which controlled about 280 billion reais in assets last year, have been an important source of investment in Brazil’s credit-starved economy, but political connections at the state-run firms have raised questions about influence in their decisions.

The pension funds caught up in Monday’s investigation are those of state-run banks Caixa Econômica Federal and Banco do Brasil, postal service Correios and oil giant Petrobras, which has been ground zero of the graft investigations roiling the nation.

Yet police said their investigation focused on losses to pensioners from reckless or fraudulent investments throughout the Brazilian economy.

Other executives affected by the judge’s order include the chief executive of wood pulp maker Eldorado Brasil Celulose SA, also controlled by the Batista family, José Carlos Grubisich; and Denise Pavarina, the head of the asset management unit at lender Banco Bradesco SA.

Press representatives for J&F and Eldorado said their executives were collaborating with the investigation. JBS referred comment to J&F.

Bradesco said its asset management units “follow the regulations in funds under management and rules by regulators” and that the bank is cooperating with authorities.

Pension funds Previ, Petros and Funcef said they were collaborating with police. Petros added that the investigation involved decisions made in 2011. Postalis did not immediately respond to a request for comment

Santander Brasil said the federal police asked for documents related to investments by the pension funds in the rig lesser Sete Brasil, which is under bankruptcy protection, and in a fund called Global Equity.

Brazilians, You Can Reverse the Coup and Restore Your President with Minimal Loss of Life 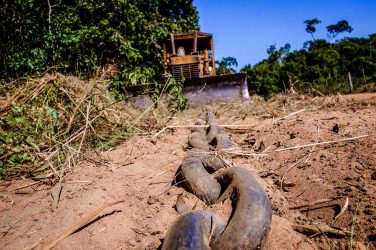 The economy of Brazil suffered the worst decline in more than a decade in ...