Ryan Lochte fantastic story on the armed robbery that never occurred would be the ultimate outrage to the 2016 Olympics in Rio if it were not for the even more despicable media bashing campaign which got started immediately after Rio de Janeiro was selected to host the Games.

Actually, perhaps calling it media bullying would be even more appropriate considering the continuous bombardment of savorous news stories that culminated with Lochte’s naive tall tales.

And the selection of Rio to host the Olympic Games could not have come at a better time considering the negative political and economic momentum in Brazil, the scandalous corruption scheme the Federal Police have been able to crack down, and the crime rate that is simply alarming – all the necessary ingredients for a complete feijoada brasileira, a popular dish in Brazil originally prepared for slaves back in the 18th Century.

With such a diverse menu of chaotic elements, plus several other environmental and social exclusion issues added to the agenda, Rio had suddenly become the new girl from the periphery trying to be accepted into the elite school of host cities.

And so the media bullying started mercilessly, and it continued until the very last week of the Olympics by plastering Lochte’s fantastic but succulent story as the cherry on the top.

However, with the sudden turn of events, the American super Olympian actually became the symbol of the lynching mob, and Rio became one of the Little Rock Nine of the Olympics.

As the Rio Olympics have drawn to a close, I am trying to check for the facts on the disasters that were most certainly going to occur which the media made sure I had been warned in advance.

However, I still cannot find real tragedies such as the Centennial Olympic Park bombing in Atlanta which left two people dead and more than a hundred injured, or the massacre of eleven Israeli athletes that occurred in the Munich’s Games. Nor there was a bribe scandal like the one Mitt Romney was hired to turn things around during the Winter Games in Salt Lake City.

Perhaps the only real victory the media bullying campaign was able to achieve was on the spreading of fear around the world which caused the Rio Olympics to be left with a large number of empty seats in several events.

On the other hand, perhaps Rio will be remembered for how the girl from the periphery was able to overcome the media bullying, and deliver her routine graciously and without major incidents.

And now that there is a precedent, if other cities of the periphery decide to bid to host the Games, I suppose the media might as well just blame it on Rio. Or they could simply apologize to Rio.

Glauco Ortolano is a writer and scholar presently teaching at the University of Jamestown.
Phone: 870-253-8825
ortolanos@gmail.com

Olympics: At the End, All Doom and Gloom Melted Under the Warmth and Joy of Rio’s People

Rio de Janeiro is the marvelous city, the heart of Brazil, a mix of ...

Brazil Uses Sports to Promote Changes in the Country

Brazil president Michel Temer’s press office informed that he will not attend the closing ...

Naked in Olympic Rio, in the Name of Veganism

The production of a steak requires as much water as 50 baths. To raise ... 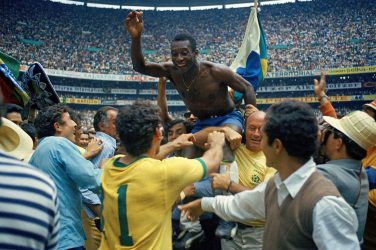 Pelé, We’ll Never Forget You for All the Joy You Brought the World

Pelé, soccer’s first global superstar, has died at the age of 82. To many ...