The government of Espírito Santo state, in southeastern Brazil, in the midst of chaos with looting, burning of buses and the death of more than 100 people, is being assisted by the federal government, which sent the Armed Forces to reestablish the order.

The state authorities handed over operational control of the public security to Brigadier General Adilson Carlos Katibe, commander of the joint task force and the authority in charge of the Armed Forces operations in the state.

In a statement on Wednesday (February 8), Defense Minister Raul Jungmann announced that 550 men from the Armed Forces would be deployed to boost security reinforcements in the state.

An additional 100 members of the National Public Security Force are also being sent to Vitória, the state capital, and will also patrol other municipalities in the state.

They will come as a reinforcement to the 1,000 men from the Army and 200 from the National Force who are already patrolling the streets of Vitória metropolitan area.

Espírito Santo has been going through a severe public security crisis since military police stopped patrolling the streets, in a protest that began Friday (February 3).

Since the by law policemen cannot strike, relatives of police officers, mainly wives, gathered in front of a military unit in Serra, greater Vitória area, and blocked police vehicles from leaving.

According to one of the fire fighter and police associations, similar protests are taking place in barracks throughout the state.

The lack of security and a surge in criminal violence in the state has led the local government of Vitória to call off the beginning of the school year in locally-run schools and shut down health services. The Espírito Santo Road Transport Workers’ Union issued a statement announcing their decision to cancel passenger transport services until security is fully restored.

At a meeting between state government secretaries and representatives of the wives and military police unions, the leaders of the protest presented two main demands: the state’s pardon for all law enforcement officers (they are banned from going on strikes) and a 100% pay rise for the entire class.

State Human Rights Secretary, Júlio Pompeu, said the state government was going to examine the proposal to see what they could offer to advance negotiations.

Wallace Barão, head of the Highway Workers’ Trade Union of Guarapari, was found shot dead in a car Thursday morning (February 9) in the city of Vila Velha, Espírito Santo state.

After his death, his colleagues staged a new stoppage in the metropolitan region of Vitória, the state capital. The buses had resumed their regular activities this morning.

The chairman of the Highway Workers’ Trade Union of Espírito Santos (Sindirodoviários), Edson Bastos, reported that the buses returned to their depots and will only be brought back into circulation when security is restored in the state.

“The government promised security. Some bus terminals were guarded by Army troops, others weren’t. We’ve had drivers threatened with guns. You can’t work like that,” Bastos said.

The State Secretariat for Public Security still does not have the data on the incidents that have taken place in Espírito Santo since family members of the military police started protesting outside police quarters.

Jorge Emílio Leal, president of Trade Union for the Civil Police of Espírito Santo (Sindipol), declared that 105 murders have been reported in the state since Saturday (February 4), most of them in Vitória’s metropolitan region.

Amid Covid-19, App with Facial Recognition Gets Food and Money to Brazil Favelas

As Brazil faces one of the worst Covid-19 outbreaks in the world, a smartphone ... 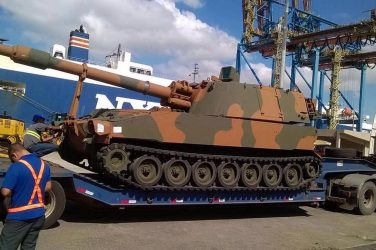