Brazilian prosecutors are probing a plan proposed by São Paulo Mayor João Doria that would introduce a powder pellet, dubbed “human pet food,” in an attempt to decrease hunger and malnutrition.

The pellets, made of nearly-expired foods from local restaurants, are intended to be distributed to the poor, mainly kids.

They would be served to children at low-income schools around the city as a complement to their meals starting in late October. Brazil’s Ministry of Education has already approved the pellets.

The plan has sparked controversy in a city where at least 1.5 million people don’t have enough food to eat on a daily basis. There’s confusion around the pellets’ nutritional value, safety and chemical composition.

Vivian Zollar, a member of the Regional Council of Nutritionists for São Paulo and Minas Gerais state, said the council was not given enough time nor access to confirm that the pellets had undergone the legal, safety and nutritional tests required for school meals.

“When we offer pellets to lower income people to eat, we are only exacerbating the inequality in society,” Zollar told reporters.

Marly Cardoso, a professor of public health and nutrition at the Federal University of São Paulo, echoed Zollar’s concerns.

“It is not food, it is an ultra-processed product,” she said.

Doria, who called the pellet “solidarity food,” is a multimillionaire businessman who rose to fame hosting Brazil’s version of “The Apprentice.” He’s a close ally of Brazilian President, Michel Temer.

In a city-wide austerity measure last year, Doria shot down a city council plan to “improve the city’s diet” by providing small-scale farmers space to sell fruit and vegetables on the street and creating city-wide price controls on fruits and vegetables. Instead, the mayor wants to give tax breaks to companies that donate food.

The pellets are produced by Synergy Platform, a Catholic organization that claims the product has the “blessing” of Pope Francis. The company did not reply to questions about the product’s nutritional composition.

On Thursday, families and children protested the possible introduction of the pellets into schools.

Brazil Faces Demands for Rights by Gays and Naturists

Forget the headlines about the World Social Forum and Brazil’s effort to mediate in ...

Through its social programs, the Brazilian federal government hopes, by the end of 2006, ... 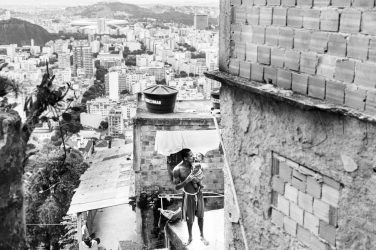 Remain at Home, Say Authorities. But Favela Residents in Brazil Aren’t Allowed Such a Luxury

The novel coronavirus pandemic has led authorities to close borders, it has impeded circulation ...

Fifteen out of the 24 Latin American and Caribbean nations, including Brazil, have met ...

Brazilian Evangelicals, Swinging Hard to the Right, Could Put a Trump-like Populist in the Presidency

Even as the overall population of Christians in the United States declines, evangelicals have ...