When former paratrooper captain Jair Bolsonaro was inaugurated as president of the Brazilian Republic on January 1, 2019, the heavy militarization of his government attracted little attention from observers. Much more focus was put on the president’s radical rhetoric, his calls for violence, and the ultraconservative profile of some of his cabinet.

And yet at the beginning of 2019, 7 of 23 cabinet ministers were military officers. As the months went on, the militarization of the government and of the entire administration only increased.

In early 2020, the government integrated two more members of the armed forces into the strategic positions of chief of staff to the presidency and minister of health. At the same time, the number of officers in the administration has increased at a dizzying rate and the management of major public enterprises has been entrusted to generals.

Bolsonaro treats the officer corps as his political base, as a military party he can use to fill political positions. In return, he and his close circle expect unfailing support. This includes demonstrating public hostility toward institutions such as the Supreme Court and judiciary, which they feel are acting against their interests.

And yet the alliance between the Bolsonarist clan and military generals is fraught. The military often presents these tensions as a sign of autonomy and of the apolitical nature of the armed forces. It does this to preserve both its own popularity with the public – and leave the exit door open.

Until very recently, the overwhelming majority of top generals considered Bolsonaro to be the best defender of their interests and the policies they want to pursue. Many of these men are ultraconservative.

They believe the left must be excluded from politics and that the west is in a culture war against ideologies hostile to their Christian traditions and to the social and domestic order. They believe communism did not die at the end of the Cold War, and that Brazil’s military dictatorship (1964-1985) was a golden age where the military fought courageously against it.

This collective imagination is the reason why military staff co-opted Bolsonaro as early on as 2014 and then contributed decisively to his accession to power.

An Army That Never Really Gave Up Power

The militarization of Brazilian politics is the result of this pact sealed between the authoritarian outsider Bolsonaro and those ultraconservative generals eager to get closer to, or even return to, power.

This phenomenon contradicts the idea that Brazil successfully transitioned to democracy following the military dictatorship. To understand this power project in the mid-2010s, there are three sets of factors to consider.

The first is just how incomplete Brazil’s democratic transition actually was. It proceeded without justice, without the purging of those in charge, and without any real imposition of civilian authority on the military.

Since 1985, all Brazilian presidents have had to tread carefully around transitional justice, including when appointing defense ministers and considering reforms to military training. In 2004, President Luiz Inácio Lula da Silva’s first defense minister, the diplomat José Viegas, was forced to resign because he dared to oppose the praise of the dictatorship by senior commanders.

The military’s institutional culture has remained hostile to the civilian political class, which it portrays as corrupt and incompetent. However, until 2018 commanders were careful not to intervene openly in politics, even during the elections of the former trade unionist Lula in 2002 and 2006 and the former guerrilla Dilma Rousseff in 2010 and 2014.

The pressure was mainly behind the scenes and on issues concerning the institution of the military, or its actions during the dictatorship. But within the military, open nostalgia for authoritarian order was widespread.

The second factor is that retired military officers, many of them former members of the repressive apparatus, created activist groups in the 1990s, spurred on by right-wing ideologies imported from the United States.

These groups imagined that communism’s new faces were progressive cultural struggles, including feminism, the rights of indigenous peoples and LGBTQ+ people and the defense of the environment.

It seems that these theories, long perceived as anachronistic and delusional, have in fact been spreading since the mid-2000s within the active army.

A third set of factors relates to the role of the armed forces in Brazilian democracy. Defending Brazilian territory has moved to the periphery, side-lined by a focus on urban security operations such as the fight against drug trafficking and the pacification of the favelas.

The armed forces have shored up their public legitimacy by taking on a policing role, at times extremely violently, as in infrastructure projects such as building roads and bridges. They’ve also taken part in UN peacekeeping operations, notably the UN Stabilization Mission in Haiti, which was led by Brazilian officers between 2004 and 2017.

All this reinforced a distrust within the army of the political classes, and reinforced a conviction that it knows how to – and can – govern. All this came to a head during the Rousseff presidency. The military was particularly upset by the National Truth Commission launched in 2012, which officially recounted and condemns the crimes committed during the dictatorship. Some members of the military high command saw this as retaliation from the communist left.

Officers positioned themselves everywhere: in the judiciary, on social media, in the administration, and stood as candidates by the hundreds in all the assemblies of the country in the 2018 election. Some members of staff even applied strategies of “hybrid warfare” from western military manuals, designed to discreetly destabilize political systems while pretending to respect the rules.

In doing this, the armed forces played a central, albeit behind-the-scenes role in the institutional coup against Rousseff in 2016 which resulted in her successful impeachment – and the subsequent election of Bolsonaro two years later.

The End of the Alliance?

Their current positions within the government is their retribution for this role. And yet the ex-captain they felt would serve their interests is currently increasingly discredited by his catastrophic management of the Covid-19 health crisis.

Some are beginning to leave the ship with great fanfare. In late March 2021, the three commanders of the armed forces resigned en masse after Bolsonaro sacked the minister of defense. Others are distancing themselves from Bolsonaro more discreetly.

Bolsonaro, politically isolated, is only protected by the popularity he still has among a third of the population. By distancing themselves from the president, however, the military top brass do not intend to leave the structures of power for good.

On the contrary, they wish to give themselves the political means to survive if Bolsonaro falls or is not re-elected. The consequences of this power project for the survival of Brazilian democracy in the years to come are difficult to anticipate.

This article is based on several chapters of the book “Os militares e a crise brasileira” (João Roberto Martins Filho org., Alameda, 2021), in particular those of Manoel Domingos Neto, Eduardo Costa Pinto, Adriana Marques, Piero Leirner and the author herself.

Maud Chirio is a master of conferences in contemporary history at Gustave Eiffel University. He is also the founder and co-president of Réseau Européen pour la Démocratie au Brésil (Red.br).

This article was originally published in The Conversation. Read the original article here: https://theconversation.com/brazil-the-road-to-jair-bolsonaros-militarised-democracy-162377

The Brazilian Navy is a step closer to having a nuclear-powered submarine. The Riachuelo, ...

Brazilian President Michel Temer was charged with obstruction of justice and racketeering on Thursday, ...

Senate Has Already Decided Brazil President’s Fate. The Vote Will Be Cast Today

For the last time on Tuesday, the Brazilian Senate heard the arguments of the ... 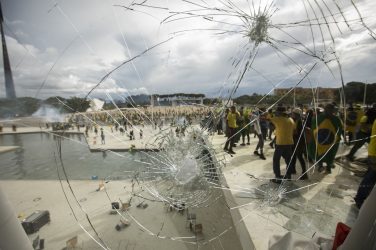