A police officer walks up to a man lying on the ground, reaches down, and picks up what appears to be an assault rifle beside the man. As the man looks up, the officer shoots him.

The camera pans to follow another police officer, approaching a second man on the ground. He shoots him, and keeps walking.

The executions occurred just outside the wall of the Daniel Piza Municipal School in Rio de Janeiro on March 30.

Maria Eduarda Alves da Conceição, a 13-year-old student who was in gym class, was also killed. Her uncle told reporters she was shot three times when police opened fire on the two suspects from across the Acari River, which runs in front of the school.

“Police officers need to be able to flip a switch in their minds, at times being defenders of rights and at times being warriors, because there is a real war,” he said.

Rio police have a dangerous job. Forty-six military police officers have been killed this year, on and off duty. But execution of suspects and excessive use of force resulting in deaths of bystanders won’t help.

These practices violate the most basic right of all – the right to life – and represent the opposite of what police should stand for. These abuses also feed the cycle of violence.

What criminal in Rio, having seen the March 30 video, would surrender peacefully when cornered? Fear of being executed can drive suspects to shoot at police. Several police officers expressed this concern during interviews I conducted last year.

Others told me that after fellow officers executed people, they feared communities would turn their backs and stop reporting crimes or warning officers of dangers, making police even more vulnerable.

Since I conducted those interviews, the situation has worsened. Rio police killed 920 people in 2016. Killings rose 78 percent in January and February of 2017.

The only appropriate response is a thorough, impartial investigation into every police killing, not just those caught on tape, and prosecution of every police officer who commits a crime. That’s what will best protect Rio’s communities and its police force.

If All Goes As Planned, Brazilian President Will Fend Off Trial and Complete Mandate

Brazilian President Michel Temer since taking office, in May 2016, has faced one crisis ... 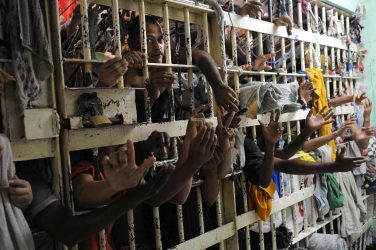 A prison riot has left at least 56 dead, with decapitated bodies thrown over ...

Luiz Inácio Lula da Silva was barred from leaving Brazil on Thursday after a ...

Land Invasions More than Double in Brazil. Majority of Victims Are Indians