Macron welcomed Lula at the Elysée in an unusual sign of support for Bolsonaro’s main rival for the October 2022 elections. Lula is ahead in every poll, although neither Bolsonaro nor Lula has yet launched their candidacy.

The meeting with Macron showed Lula seeking to capitalize on Bolsonaro’s diplomatic isolation resulting from his environmental policies which have resulted in deforestation of the Brazilian Amazon rising to a 15-year high.

“It seems like a provocation,” Bolsonaro said of the meeting in a radio interview. “(Macron) is more interested in having a passive and corrupt person like Lula, an ally of his, than someone like me (leading Brazil) in the future,” he added.

Lula was convicted in 2018 of taking bribes from engineering companies in exchange for public contracts and spent a year and a half behind bars before Brazil’s supreme court overturned his convictions this year, opening the door to a presidential race.

Bolsonaro’s rift with Macron dates back to 2019 when the French president denounced the growing number of fires in the Amazon and Bolsonaro replied that those comments were disrespectful of Brazilian sovereignty. Bolsonaro also made improper comments regarding Macron’s wife at the time.

This conflict is said to be among the leading causes why a trade deal between the European Union and Mercosur, agreed upon in 2019 after two decades of talks, has not yet been ratified.

The controversial Bolsonaro is said to be among the candidates for the prestigious Time magazine’s Personality of the Year award. “I hope to win,” Bolsonaro said when told about the possibility.

Bolsonaro was said Thursday to be way ahead in that race thanks to the support from his followers to be declared “the most influential” person in the world.

The Brazilian leader was ahead with 76% of the votes, followed by former US President Donald Trump. Vying for third place were health care professionals linked to the fight against COVID-19.

“Times magazine (sic) has been doing a survey that has been going on for decades. The personality of the year. There are 100 people. I was among the 100 people in 2019 and 2020 and now in 2021 we are leading,” Bolsonaro said during his weekly broadcast on social media, as he called on supporters to keep voting for him.

Brazilian media have reported Bolsonaro followers had agreed on Telegram to massively support the president.

“That’s fired up! I hope to win if I deserve it. I thank whoever voted for me,” he added.

Every year the magazine highlights the life and work of a man, woman, couple, group, idea, place or machine that has most influenced world events in the last 12 months “for better or for worse.” Nevertheless, Time reserves the right to make the final choice.

In addition to his Amazonia approach, Bolsonaro is known for considering COVID-19 a disease which can be treated with drugs not recommended by the World Health Organization much better than with vaccines. 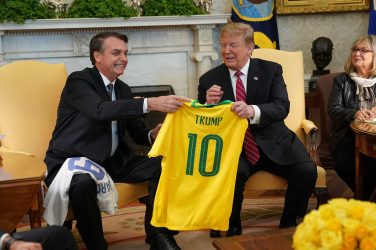 Lula Gets Assurances from Moro He Doesn’t Face Imminent Arrest