Five years after the collapse of the Fundão tailings dam, in the town of Mariana, Minas Gerais state, none of the expected reparation measures has been concluded, according to prosecutors making up the Doce River Task Force of Brazil’s Federal Prosecution Service.

“The disaster that laid waste not just to Mariana, but to all of the Doce river basin — an area as large as Portugal — continues here. Five years later, nothing is concluded, everything is yet to be done,” said prosecutor and task force coordinator Silmara Goulart.

“Not a single group of people affected — field and laundry workers, artisans, fisherpeople, small business owners — was fully compensated. The environment has also not been fully recovered. Not even the municipality of Bento Rodrigues, symbol of the disaster, was rebuilt,” added Goulart, who last week spoke to the press on the measures taken since the disaster.

The facility breached on November 5, 2015. More than 40 million cubic meters of waste reached the Gualaxo do Norte river, in Mariana, were discharged into the Doce river, and subsequently proceeded to the Regência sea, on the coast of Espírito Santo, a neighboring state, also in southeastern Brazil.

The slurry caused the deaths of 19 people and a significant environmental, social, and economic impact that reached 39 municipalities in both Minas Gerais and Espírito Santo.

In 2016, to compensate for the damage caused, the federal government and the states of Minas Gerais and Espírito Santo signed a Transaction and Conduct Adjustment Term (TTAC) with companies Samarco, BHP, and Vale, in charge of the dam.

In addition to creating the Renova Foundation, dedicated to execute the compensations, TTAC stipulates 42 programs that must be carried out throughout the 670-km stretch over the course of the Doce river and its tributaries.

Later on, in 2018, another conduct adjustment term was signed to change the governance of Renova Foundation and ensure the participation of the people affected in the compensation process.

Five years after the disaster, 19,039 local residents still depend on the supplies brought by water trucks due to unsafe water consumption, which has been aggravated by the pandemic of the novel coronavirus. By August this year, 153 of the 374 measures to improve water supply systems (41%) were carried out to completion. The deadline set in the TTAC is said to have been 2018.

“This is an incident that’s part of the everyday lives of those [affected], which impacts the most basic right—access to water and to health care. When you’re not sure whether the water you make food for your children with may be consumed, you feel anxious, and that’s another way to harm your mental health,” said Minas Gerais Public Defender Carolina Morishita.

Also according to the Federal Prosecution Service, only 10,885 of the 31,755 families registered (34%) had received some sort of compensation by August 2020. Minas Gerais Prosecutor André Sperling compared the plight with that of Brumadinho, where a dam belonging to Vale also collapsed, leaving 259 dead.

There, Sperling noted, over 100 thousand people received an allowance of some kind. “This was never close to being the case in the Doce river basin. There has never been a real opportunity for those affected to have their case made in this negotiation process. What we do see is the affected ones left to their own devices,” he declared.

Last week, mining company Vale posted US$ 1.654 billion in net profits in the third quarter of 2019, after losses reported at $133 million in the previous quarter. “This made me think that maybe we, as Brazilian society and as a global community, need to think about how people can be happy at the expense of the suffering and helplessness of the people impacted. For me, this is a third disaster,” Goulart went on to say.

The foundation also says that, during the four years of work, nearly US$ 500 million have been paid in compensations and allowances to those who were able to prove they suffered from the damage.

According to Freitas, there is an obstacle in serving victims who cannot demonstrate they were affected, as the Brazilian Civil Code says the compensation cannot be done without demonstrated damages. Renova also states it has made efforts to treat local water and sewage, in addition to other measures. 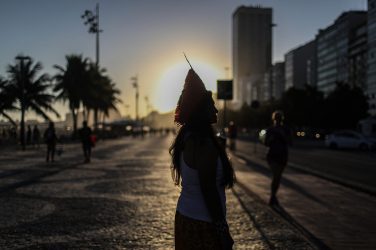 Another Candomble religious ground has been plundered and burned, this time in the town ...